Mission Beach in its Regional Historical Context (by Helen Pedley)

The first white settlement north of Bowen, north Queensland, was on Rockingham Bay.  Port Hinchinbrook, later renamed Cardwell, was settled in January 1864 and this became the gateway for settlers to the region for a number of years.  Cardwell was settled as a result of the need for a port outlet to serve the rich pastoral areas west of the Ranges, in particular, the Valley of Lagoons.  In January 1864 a small party of 20 men landed at Rockingham Bay and within days they set up camp, surveyed the first streets and began work on clearing a track over the range.  This track to the south of Cardwell, now known as Dalrymple Track, still includes the oldest engineering structure in North Queensland, the stone-pitched bridge at Damper Creek.
two miles off the coast, and the tracks to the inland had to pass over steep, rainforested ranges.  It was not long before Townsville (founded late in 1864) surpassed Cardwell as a port of entry and regional centre.  Cairns, Ingham and Geraldton (Innisfail) also developed and Cardwell was left behind.
The district now known as Mission Beach is located on the coast north of Cardwell and was originally part of the Cardwell Division local government area constituted in 1884.  This division included the area from the Hinchinbrook Channel in the south to Double Point near Mourilyan Harbour in the north.  Later the boundaries were changed and the northern section of "Mission Beach" became part of the Johnstone Shire in February 1937.

However, although the beaches were included on maps, generally known as the "Clump Point" region, opening up for selection and actual settlement was slow in developing.  The coastal floodplains of the Murray, Tully and Hull rivers which discharge into Rockingham Bay are wetlands subject to extensive flooding in the wet season.  Mangroves fringe the coast and movement in the area was very difficult for the first white settlers.  It was not until the 1880s that the first settlers became established.

the Djiru-speaking Aboriginal people who first inhabited this coast were linguistically, culturally and socially related to the Dyirbal, Girraman and Gulngay groupos of the Tully and Murray River districts.  Hunters, fishers and gatherers of the rainforests and coast, they uitilised the rich plant and animal resources to provide their needs.  They excelled in making canoes and rafts and were expert fishermen of both fresh and marine waters.

Contact with early navigators and coastal surveyors as well as with beche-de-mer fishing boats was established long before the first white people settled the beach areas in 1882.  Timber-getters also camped on the beaches during their cutting expeditions and occasionally utilised Aboriginal labour in return for tobacco or tools.

The Kennedy Expedition and Early Explorers

The ill-fated Edmund Kennedy Expedition of 1848 landed on the south side of Tam O'Shanter Point, which was named by Captain Stanley after the barque which brough the explorers from Sydney.  A cairn was raised a century later to commemorate the landing.  Kennedy had undertaken to travel north to Cape York and then down the western side of the peninsula, however, he was forced to turn south to find a way through the swamps and jungles of the coast.  He crossed the Hull, Tully and Murray Rivers before being able to turn inland just north of what is now the present Cardwell.
Other Settlers Arrive
Twenty years after the Cuttens took up their land, the Unsworths and the Porters arrived.  Others to follow were the Garners, after whom Garners Beach is named, and later, at South Mission, the Reid cousins (who grew bananas) Morton, Beaman and Webb.

The "Mission" Was Never a Mission

Chinese banana growers along the Tully River were numerous after 1900.  They cleared garden plots and grew bananas that they sent to southern markets, loading them from their sampans onto the lighters which took the fruit out to the coastal steamer waiting at the river mouth.  The Chinese employed Aboriginal labourers and opium addiction became a problem.  Other problems arose from the inevitable conflict resulting from white settlers moving into the traditional territories of the Aboriginal people.  The Queensland Government proposed to establish the Hull River Aboriginal Settlement on high ground at the north end of what is now South Mission Beach to combat the opium and other problems.  Superintendent John Martin Kenny arrived on 1 September 1914 and commenced organising the clearing and building of three large houses on the hillside overlooking the beach. 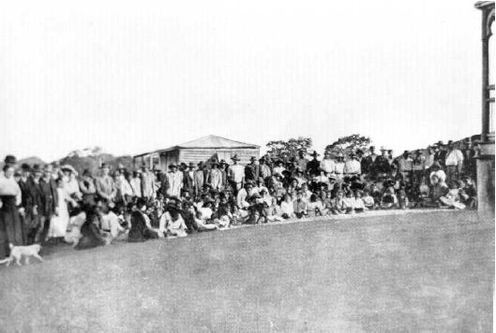 On 10 March 1918 an immense cyclone and tsunami swept across the area and wiped out the Aboriginal settlement at Hull River as well as the homes and the orchards of the scattered settlers on the coast.  The afternoon the cyclone hit, a telephone link had just been set up between Banyan (the forerunner of Tully township) and the "Mission".  It was not to be replaced for some time.  During the cyclone the camping area at the beach was covered to a depth of ten feet by the tidal wave which swept away the bark and grass huts, with several people being swept away and drowned.  Superintendent Kenny and his daughter died, killed by flying debris, as did an undocumented number of Aboriginal people.
A Township Surveyed

Although the Cardwell Shire Council and the Tully Chamber of Commerce had suggested in 1929 that a township at Mission Beach should be surveyed, this was not done due to a lack of access roads to the beaches.  After the PEI road from El Arish was opened in 1936, and the bridle track to Tully which had been improved by timber-cutters, was also taken over by the PEI, access was considered adequate.

In 1939 a township named Kenny was surveyed by D. Ryland; the first lots went on sale at Tully Court House in December 1939.  As none of the locals called it Kenny, it officially became the local name: South Mission Beach.
Dunk Island

Dunk Island was named by Lt. James Cook after the Earl of Halifax, George Montague Dunk, when Cook sailed past the island on 9 June 1770.  Edmund James Banfield, the famous Beachcomber who lived on Dunk from 1897 to his death in 1923, recorded that the Aboriginal name for the isle was Coonhanglebah.  Banfield was an ex-journalist from England who came to Townsville seeking respite from health and stress problems.  He and his wife built a slab hut and then a bungalow on their 360 acres on the island and from here he made his observations and recorded his impressions of life on this piece of tropical paradise. His book "Confessions of a Beachcomber" should be required reading.

In 1935 Hon. Hugo Brassey, an Englishman, bought 200 acres on the island and commenced the development of a resort and building of an airstrip.

During WW2 Dunk Island was annexed by the RAAF and became home to secret radar equipment. In November 1942 the RAAF installed a Radio Direction Finding Station.  After the war the resort was again developed, particularly after it was purchased by Trans Australia Airlines in 1976.  The majority of the island is now a National Park, allowing its natural beauty as well as its provisions for visitors, to be fully appreciated.

The first school house was mid-way between the two beach families who had children, the Webb and Dunlop families.  They built the house on Dunlops' property at Wongaling Beach in about 1934.  The four children studied by correspondence here under the guidance of a governess.  The Mission Beach State School was extablished in 1953.  In 1964 there were only 15 pupils on the roll who attended school in a small weatherboard building on Boyett Road.  As attendance grew, a larger school was required.  The new school premises were opened at Wongaling Beach in 1993.