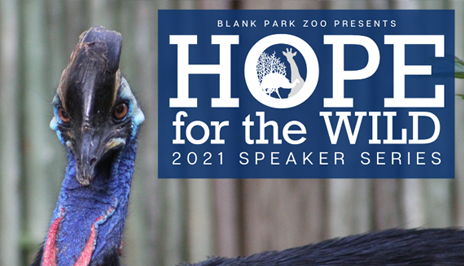 We are so excited you are joining us on our journey to learn more about cassowaries and the coordinated effort being done to save them.

We would like to take this opportunity to thank our partners in conservation, the Community for Coastal and Cassowary Conservation (C4) for their help putting this all together.

We hope you enjoy the program and learn more about ways YOU can give Hope to the Wild. 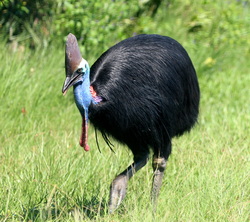 Mrs. C on verge of Wheatley Road near tip. Photo J. Larson
The Southern Cassowary (Casuarius casuarius johnsonii), with its brilliant blue and purple head and neck and red wattles appears extensively in promotional brochures throughout the region. However, it is an endangered species and its future is uncertain. In evolutionary terms, the flightless birds, or ratites, were some of the earliest types of birds to develop. Some still exist today including the emu, rheas, kiwis and the ostrich. But several have become extinct in recent times including the Moas of New Zealand and the Elephant Bird of Madagascar.
Some of these primitive birds are recognised as such because they have feathers which are not structured for aerodynamic flight. One of the most striking features about the cassowary is its long and unusual black feathers. Cassowary feathers differ from other birds in that they have a quill that splits in two.
Cassowaries are Gondwanan in origin and were concentrated in the small part of the supercontinent that later broke apart and became the present areas of Northern Australia, Papua New Guinea and some of the eastern island groups of Indonesia. Two separate populations of Australian cassowary exist - one in the Wet Tropics area from Mt Halifax/Paluma through to Cooktown and the other on Cape York Peninsula in the McIlwraith and Iron Ranges, Jardine River area and the Eastern Dunes. The Australian cassowary is called the Southern Cassowary or sometimes the Double-wattled Cassowary. Once you realise that this species is also found in Papua New Guinea along with two more species and several subspecies, then it becomes clear why ours is called the Southern Cassowary. 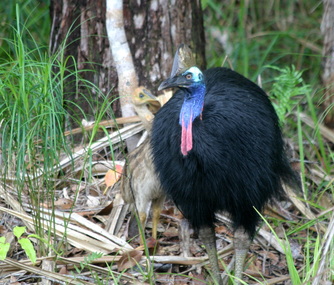 The female cassowary has turned the tables on what is mostly a maternal social structure in the animal world. The males incubate the eggs and raise the chicks. Once a clutch of eggs is laid, the female will seek out other males with which to mate. For each male that she finds, she will provide a clutch of eggs (usually 3 to 5) for him to nurture.

Why Cassowaries Are So Important
Rainforests would be a very different place with diminished diversity if there were no cassowaries. These huge birds are the only animals capable of distributing the seeds of more than 70 species of trees whose fruit is too large for any other forest dwelling animal to eat and relocate. If these trees did not have an animal to disperse their seeds, they would only occur in concentrated pockets around the parent tree or in places where the seeds rolled such as gullies or the bottom of slopes. As a result over a long period of time the structure of large tracts of forest might change. In tropical rainforests in other parts of the world there are a wide range of animals which fulfill this role. In the Wet Tropics the cassowary plays the role which is accomplished by entire guilds of animals elsewhere.
There are at least another 80 species of plants which are also assisted by the cassowary's eating habits. These species have smaller seeds but many are toxic and only the cassowary can safely consume them. Such dangerous eating habits are possible because the cassowary has a short/rapid digestive system which appears to be supported by an overactive liver and an unusual combination of stomach enzymes. Other animals such as White-tailed Rats may help distribute these smaller seeds but more often than not, they damage the seed rather than dispersing it intact. So the cassowary is vital for the widespread continuance of over 150 species of plants. That is why the cassowary is referred to as a "keystone species".
One of the most ironic threats to cassowaries is the perceived kindness of people who enjoy handfeeding these impressive animals. Once a cassowary is 'tamed' and approaches people rather than avoids them, its chances of being killed increase dramatically. This is because the cassowary frequently approaches cars or wanders regularly through residential suburbs where it can be attacked by dogs, especially those breeds kept for their hunting skills.

There are three specific areas in the Wet Tropics that are 'hot spots' for cassowaries: the Daintree area which has the problem of roads cutting through the bird's home ranges; the Kuranda and Atherton Tableland area which has the problems of habitat loss, fragmentation by roads and marauding dogs; and the Mission Beach area which has suffered extensive habitat loss to the degree that the birds have been squeezed into unnaturally small home ranges. They are forced to seek food from plantation sources and this closeness to human settlements brings them into more frequent contact with dogs. As they try to move around the remaining patches of habitat between the beach and the sloping hinterland behind it, they are commonly run over by cars. For more information check out http://www.missionbeachcassowaries.com.

Still much that needs to be done 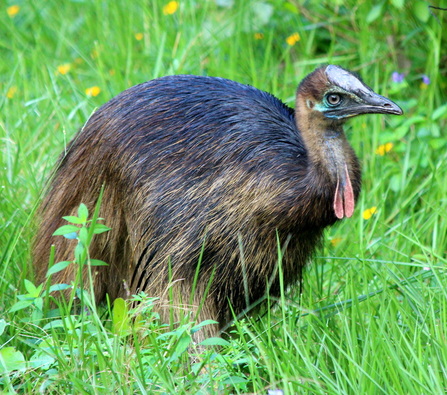 Give the young a chance to grow up and mature in their natural environment. Photo J. Larson
As an endangered and nationally listed species, there is help being directed towards protection and hopefully recovery of cassowary numbers but there is still much that needs to be done. The concern and action of everyone who resides in the Wet Tropics area is needed to save this bird but there are still too many people who aren't sufficiently interested. Simple steps can go a long way such as slowing down in cassowary 'hot spot' areas and keeping dogs restricted to a fenced yard or on a leash. If the whole community takes up the challenge, we could save the cassowary. Information above from WTMA
The following video was put together through Terrain and kindly donated to C4 for viewing by visitors to our Environment Centre.